If you’re new here, welcome to my channel.  My name’s Vanessa and I aim to be an ally on the spiritual path.

As we navigate our spiritual awakening, it’s very, very common to come up against anger and rage. So many of us have been taught that anger is wrong and that we shouldn’t express it. We were never really given good ways to express our anger. We were taught that if we were angry we should just let it go…but how do we actually let this go? Most of us have just stuffed down our anger rather than actually releasing it.

So, when we experience a kundalini awakening or a spiritual awakening and we’re downloaded or filled with all of this light energy, all of the density starts to move up and a lot of the density seems to be anger and rage. There’s also sadness and other emotions, but we’re going to focus on anger here today.

First off, we need to remember that our anger is not wrong.

Our anger is just an emotion that needs to be felt and released.  When we allow ourselves to feel these emotions and release them, then they can be healed. These things in us can be healed and released. We need to be able to actually allow this energy to move and allow ourselves to feel these things. Also, remember that sometimes anger has a purpose. Sometimes anger is here to show us that we need to take a different action or that we need to take action if we’ve been a little bit complacent and stagnant. Sometimes anger shows us where a boundary of ours has been crossed—maybe one that we didn’t even know existed. So, our anger, ALL of our emotions, are tools, messengers for us. It’s important to wrap our minds around the fact that our emotions will always be what they are.

The point of this is, rather than to control our emotions, is to find healthy ways to express them so we don’t stuff them and create disease in the body. Our physical, emotional, mental, spiritual bodies are all connected, and when we’re blocking energy in we start to create disease. DIS – EASE.  DIS-EASE in the energetic and emotional bodies whill then filter out into DIS-EASE in the mental body and DIS-EASE in the physical body, as the final manifestation of what’s going on in the spiritual body. This stuff is really fascinating!

So, how can we healthily release anger?

Move your body, sweat it out and allow your mind to focus on something else so your body can actually process the emotions and all of the energy.

Literally shaking—shaking your hands, shaking your body, letting everything go and allowing your body to release the energy. This is something that is really interesting…animals in the wild, when they experience some kind of crazy event, they will go into the wilderness and just shake it off. Have you ever seen ducks fighting or dogs having a little tussle? They’ll always shake it off and what they’re doing is releasing that crazy energy. Humans don’t do this. We keep it all in and make stories about it and shove it down so we don’t have to deal with it. Eventually, we’re going to have to deal with it so if we can just shake ourselves, shake it off, allow our bodies to release the energy, it will move way faster!

Try it right now.  It does such wonders for the body.

3. Write down all your angry thoughts.

Just brain dump onto paper and don’t think too much. Let it ride. Just write down everything going through your head. Every thought that goes through your head, no matter how gnarly, write it down on a piece of paper then take that paper and FREAKIN’ RIP IT UP! Rip it up, put it through the paper shredder or even better, light it on fire (IN A SAFE WAY…make sure there are not 100KM winds like I’m experiencing right now!). Symbolically, when we dump all of this energy on to the paper, we’re actually taking the energy out of ourselves and funneling it through the pen and the ink onto the paper and then the act of destroying it actually works with our subconscious mind to say “I’m done with this.” “I am releasing this.” “This no longer serves me.”  “This is out of my field.”

4. Give your anger a voice.

This works really well with any emotion, but we’re focused on anger today, so give your anger a voice. Find a place where you can have some privacy and actually voice what’s going on. All of those angry thoughts that are running through your mind, speak them out. This too gets us out of our head and allows us to see these thoughts and these emotions from a different perspective, which in itself can shift our mind. Just giving our emotions a name actually diffuses a lot of the power that they have over us. So when you’re in the thick of it, just say, as an example, “Whoa, I’m so angry right now. I’m so pissed off, I feel like a freakin’ idiot!” Whatever you need to say, just get it out!

There’s a reason we call people to vent sometimes, but that’s not always available. So if you can just vent by yourself, it might seem crazy but you will feel so much better. This act also shows your psyche that it’s OK to feel these feelings and that you are acknowledging them. That usually diffuses a lot of their power. And if you need to, SCREAM.

A lot of us are really uncomfortable with this. When I started doing this I was just like blubbering and stumbling because I was so blocked up and so used to never expressing myself, never expressing my emotions, particularly anger. I was going through this awakening and had all of this rage surfacing. Luckily I lived in the forest, so I could just go out and SCCCREEEEAAAAMMMMM! You would be surprised at how cathartic that is. This is a healthy way (well, maybe don’t do it in the mall or in public) but if you can walk or drive somewhere there aren’t many people and you can just let it RIP….just try it.

This will, for one, balance and unblock your throat chakra. But also just, LET IT OUT. Scream into a pillow. Cry if you need to. Allow yourself to actually express this stuff. And, I know, it seems like you’re having a tantrum and…you are. When all of this stuff is coming up it can seem to come out of nowhere and we don’t really understand it because this anger, when we’re going through a spiritual awakening, has been pent up for years in a lot of cases. FOR YEARS. This could even be stuff that is coming up from childhood. So, you know what happens with kids get angry, they just let it out! Allowing ourselves space to actually express this is so healing. You see, with kids, they have a tantrum and then they’re fine because they’ve released the energy. We need some ways to release the energy as well. Ways that are healthy, ways that will not harm other people and not bring other people into our stuff. This is for us to deal with.

A simple thing is the 4×4 breathing technique which you can watch in my video linked here. Coming back to the breath and putting your focus on the breath calms the nervous system and then while you’re breathing and focused on your breath see if you can tune in to your body and notice where that anger lives. See if you can focus your attention into funneling white light energy into the spot where the anger lives and just diffusing it. It doesn’t have to be this big dramatic thing just allow the energy to come in, right into that spot, and just penetrate that spot where the anger is and diffuse it from the inside out.

Another thing that we can do is progressive muscle relaxation. This is just tensing and releasing different areas of the body in succession. This gives the mind a job as well and kind of focuses us. You can start from the face and move all the way down. So what this looks like, you want to tense all of the muscles, hold it really tight and then release. As an example, with your face, you scrunch your entire face, hold it for about 10 seconds and release. Let yourself turn into a floppy noodle when you release and just let everything relax. After your face and your shoulders, you can move on to your hands and your arms, just tense them up, then release them and let them fall into your lap. You can do the same with your leg muscles. Stretch your legs out straight, tense all of the muscles, crunch your toes up and then let them release. Deep breaths…

Let me know in the comments below if you did these with me and how you feel after.  I would love to hear from you!

If you liked this blog post, please share it with someone you think this would help.  We all need healthy ways to express and release our anger so that we can live more balanced lives and just keep flowing with it.

Sending you guys tons of love! 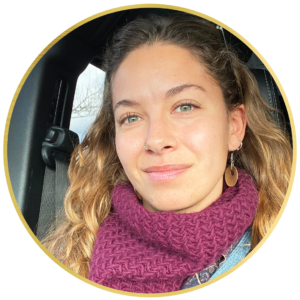 Vanessa Ooms is an Author, YouTuber, Graphic Designer & Reiki Master Teacher on a mission to help others integrate their shadows and live enriched lives!