The Surrender Experiment by Michael A. Singer 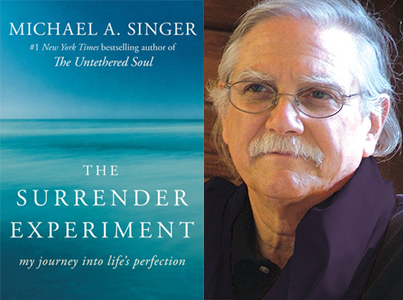 Today I want to talk to you about surrendering to the flow of life. I just finished “The Surrender Experiment” by Michael Singer. The book follows the author, Michael, and his profound spiritual experience in which he separated himself from the incessant train of thoughts that were constantly rattling around in his brain. This practice is also known as “transcendental meditation”. The longer he stilled his mind and body, the more he disconnected from that train of thoughts. This led him to the realization that our minds are constantly making judgments and informing us of his preferences. These constant thoughts can be something as simple as “It’s snowing. It’s cold outside. I don’t like the cold.”, and so on and so forth.

After Michael Singer made his realization, he dedicated his life to surrendering to the experiences life was bringing him despite what his mind thought about it. His initial instinct was to move into the woods to quiet his mind and have tons of time to meditate, but instead he conceded to the experiences that life was bringing to him. He started teaching classes about the voice in his mind, he built a temple, and taught himself computer programming, which resulted in one of the biggest corporations in America. Throughout all of this, Michael still kept his spiritual practices and kept surrendering.

The life that was created out of the experiment was beyond anything he could have imagined.

This got me thinking about how we create suffering for ourselves when we resist what life is bringing us. Our higher power is trying to bring us new experiences every day. These experiences might not look like anything special, but it could be a stepping stone in a chain of events that could lead us down the most amazing trajectory. As humans, we like to pride ourselves on knowing what’s coming…and the mind loves to have certainty.

Let me tell you something: it’s a fallacy.

We don’t know what’s coming for us. We don’t know what our life plan is or what the future holds. The only thing we can truly do is surrender. This concept of surrendering sometimes has a negative connotation….but surrendering isn’t always rolling over or waving the white flag. It’s allowing the beautiful, graceful flow of life to take us where we’re meant to go anyways.

In life, we need to let go of the side of the river and allow ourselves to float.

That river is the flow of life, and hanging onto all of our thoughts is the equivalent of grabbing onto every rock, stick, and log down the river. Instead, let go and let God. If God isn’t your word of choice, let go and let the universe lead you. Let yourself be led, carried, and guided, rather than holding onto the side of that river. And see what happens. Allow yourself to be present in every situation that life brings to you, whether it’s a new task that comes across your desk or taking time to spend with your children when they ask (even if you have a million things to get done).

Our life is supposed to be joyful, fun, and yes…challenging at times. But we can make it so much harder for ourselves when we resist our reality and seek something else – something bigger, flashier, more lavish, or something that just isn’t meant for us. When we’re seeking something other than what we have right now, we create suffering for ourselves.

That doesn’t mean don’t have goals and ambition for the future, but it also means to allow yourself to not be so rigid.  Be flexible. Be bendy. Float down that river.

Think of it this way – there’s a reason that the Bible mentions having the mind of a child. If you look at how kids view the world (no filters, wild curiosity, wonder), life becomes magical. Every little thing becomes magical. Talking to the people around you becomes magical again because we look at them with curiosity and wonder rather than making all of these assumptions about them.

Life has this beautiful graceful flow to it. That all of us are a part of. Every single one of us.

Take a second and breathe that in. Close your eyes. Breathe in. Breathe out.

Allow the pressures and structures to fall away, the world to fall off your shoulders for a minute to feel the undulation of the universe and life coursing through you.

Did you feel that? That’s what it’s all about. Being present. Saying yes to what’s presented to you and what you’re being gifted with everyday. Sometimes, even if it doesn’t look like a gift, it is. Every single thing is here for your enjoyment, growth, expansion, and learning.

Our minds don’t tend to view it that way, but if we can sit and be still long enough, just as Michael Singer did, we can see that we’re not that incessant train of thought. We are not the sum of our preferences and the things that we’ve learned. We are not that voice in our mind. We are a divine spark. YOU are a divine spark. Your soul is so much bigger than your body. SO MUCH BIGGER.

Your purpose is to show up every moment with presence, curiosity, grace, and most of all with surrender.

Vanessa Ooms is an Author, YouTuber, Graphic Designer & Reiki Master Teacher on a mission to help others integrate their shadows and live enriched lives!